Remember seeing this RPPC of mine elsewhere on the blog? This is from my mother's (Brenda Steunenberg Richards) old photo album and was used by Idaho Public Television on their website and also in the article A Case for Murder highlighted in the previous blog entry. At the foot of the stairs on the far right is Warden Whitney from the Idaho penitentiary and just to his left is a fellow by the name of Bob "Bad Man" Meldrum. Of course Harry Orchard is to Meldrum's left and up toward the top of the stairs is the more well known Charles Siringo.

So with the likes of Orchard and Siringo, what could be so bad about Bob? Anthony "Tony" Lukas described Bob pretty well. 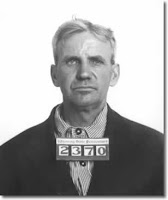 "Meldrum was widely known as Hair Trigger Bob because of his habit of shooting men-armed and unarmed-on the smallest provocation. The wooden grips on his .44 Colt revolver bore fourteen notches, each representing a man he had taken down. A cocky little fellow-barely five food six and 140 pounds, with icy gray eyes glaring above a flamboyant mustache-he was especially truculent when drunk, which was often. He suffered no penalties for his gun play since most of it had been performed in the employ of law enforcement agencies or corporate clients. Formerly the town marshal of Dixon, Wyoming, a community notorious for its six-shooter free for alls, he worked of late for Colorado mine owners. Indeed, notches thirteen and fourteen were added to his gun during the Telluride skirmishing. He'd also teamed for a time with the notorious gunman and sometimes Pinkerton, Tom Horn. Meldrum was thus a classic example of that romantic but often misunderstood figure exemplified by the protagonist of Owen Wister's The Virginian, the seemingly free-spirited gunfighter who, in his lethal defense of property rights, played such a large role in imposing a new industrial and corporate order on the rambunctious West."

Continuing from Big Trouble with Haywood, Pettibone and Moyer en route to Idaho on the "kidnap special" train from Colorado...

d Bob Meldrum, now (Buckeley) Well's orderly-cum-bodyguard. Once again, as at Telluride, Meldrum was putting his gunslinger skills at the disposal of the West's new corporate order. As he swung aboard the train, Haywood, Moyer and Pettibone recognized Hair Trigger Bob as their old adversary, a desperado ready at any moment to put a bullet through them."

"Haywood had plenty of opportunity to study Meldrum. Each of the prisoners, still in handcuffs, was watched closely at all times (even when he went to the toilet, it being feared that the fugitive might succeed in squeezing out the toilet window). Although guard assignments shifted, Meldrum seemed to keep his pale eyes on Haywood. "I never say a human face that looked so much like a hyena," Haywood recalled. ”His eyes were deep set and close together. His upper lip was drawn back, showing teeth like fangs."

And Meldrum and Siringo, working for the same side this time, meet up at the Idanha...

Picture to the right of the Idanha and Charles Siringo. From Big Trouble by J. Anthony Lukas.

"At times the spacious lobby (of the Idanha) didn’t seem large enough to contain all the gunslingers in the prosecution camp. One day, two of the deadliest-Charlie Siringo and Bob Meldrum-confronted each other by the mahogany bar. Hawley had imported Meldrum and his sidekick, Rudie Barthell, ostensibly under subpoena as prosecution witnesses, actually as insurance against federation "thuggery” or other contingencies. Ten years before, as sheriff of Carbon County, Colorado, Meldrum had pursued a gang of horse thieves headed by "Kid" Curry, while the Pinkerton's sent Siringo to infiltrate the bunch. Unaware of the desperado’s identity, Meldrum had almost killed Siringo. Now, as they eyed each other grimly, Meldrum's hand jumped toward his revolver pocket. "I've felt worst about not getting you than any man I ever missed," he growled. "It's all right, Bob," said Siringo. "I call it all off." Ultimately, they downed a whiskey together." (Big Trouble by J. Anthony Lukas, 1997).

As we can see, the shades of law and order were often difficult to distinguish in those days. Governor Gooding, Hawley, McParland and others had agreed to put the likes of Meldrum and Siringo on the payroll to counter any threats of labor violence. At times it was difficult to determine who was the greatest threat and who exactly represented law and order!

Here is a picture of Bob Meldrum's actual Colt courtesy of collector/dealer Kurt House. Kurt is another history buff as well as gun collector/seller that I ran across in my travels. We struck up a conversation and I found out he was a Bob Meldrum collector and had acquired one of Meldrum's Colt's for his collection.

"This fancy, silver, engraved, ivory griped sidearm of Bob Meldrum's is a good example. Meldrum caused the demise of about 15 victims, was finally convicted of one charge and served in the Wyoming Penitentiary. This Single Action was sold to Hibbard, Spencer and Bartlett, Chicago, Illinois and shipped March 10, 1904 with four other guns without mention of engraving, although experts agree it was engraved by Cuno Helfricht of the Colt factory. It is silver plated, .45 caliber, with carved ivory steerhead grips, and is inscribed on the butt with initials "RDM." It was the property of Robert "Bad Bob" Meldrum who served in various capacities as a mine security guard, lawman, Pinkerton agent and hired gunman in Telluride, Colorado and around Baggs, Wyoming" (And as we know, Boise, Idaho too!). Kurt House Collection, Paul Goodwin Photo.

The pictures are from Kurt's 2008 Calendar of "Significant Colt Single Action Revolvers." Each month highlights a Colt of historical significance.

You can contact Kurt through his web page and/or email if interested in purchasing one of these great calendars.

Museum of Northwest CO. (scroll down for Meldrum)