More of Premiere Night - Assassination: Idaho's Trial of the Century


How about: A Good Hanging Spoiled 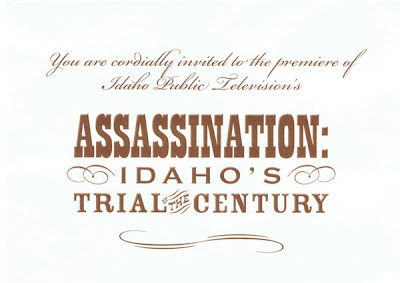 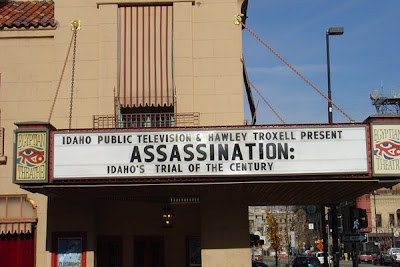 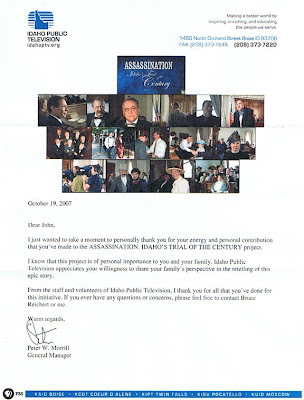 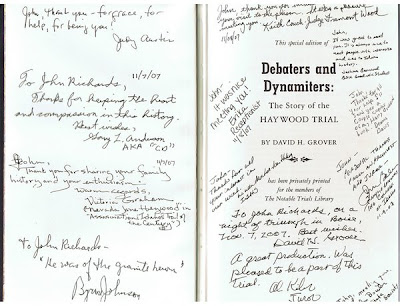 Samples of the autographs in a now very prized copy of Debaters and Dynamiters (Notable Trials Version) signed by the author David Grover and others during our visit to Idaho for the premiere of Assassination: Idaho's Trial of the Century. I hope to get a few of those I missed during the next Idaho trip.
Posted by John T. Richards at 11:13 AM No comments:

Sign My Guest Book - Don't be shy, stop in and say howdy. Click on the this link & then "Comments."

Click here on "COMMENTS" and pass along information you have about Idaho history that relates to the topics on this blog or just to introduce yourself and say hello. I would love to hear from folks and to make contact with family members and friends interested in our history. Of course, you can continue to email me privately too if that is your preference.

All comments are reviewed for content and any "junk" stuff is deleted prior to public posting.

Scroll to the bottom for the most recent comments and to post your own.
Posted by John T. Richards at 7:23 AM 70 comments: 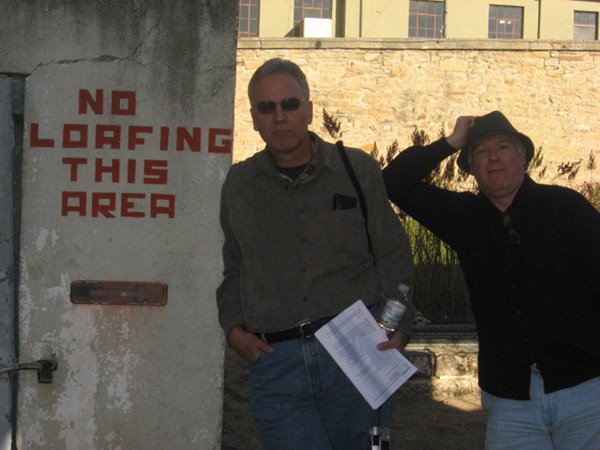 These pics probably look familiar, as I am moving some items up from the lower picture section. This way they can be be archived, save some download time and space and be available for easier viewing. These were taken during our special visit to the Idaho Pen on the day following the premiere of Assassination: Idaho's Trial of the Century.

John (me) on the left and Gary Anderson (aka Clarence Darrow) on the right "loafing" at the Idaho Pen. It was both educational and a lot of fun to spend a little time with "Darrow." Click on the image to go to Gary's "American Legends" website. 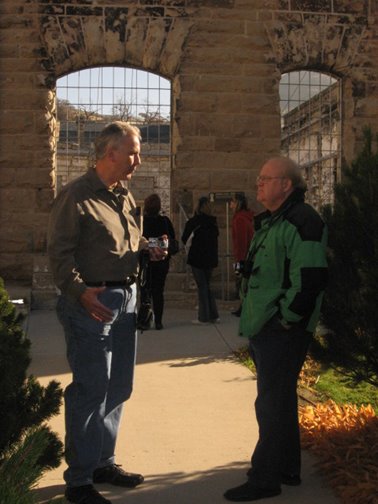 John and Keith Couch (aka Judge Fremont Wood). "But judge, did you have to keep telling the jury that independent corroboration was needed of Orchard's testimony!" Click the pic to read more about Judge Wood (bad link). 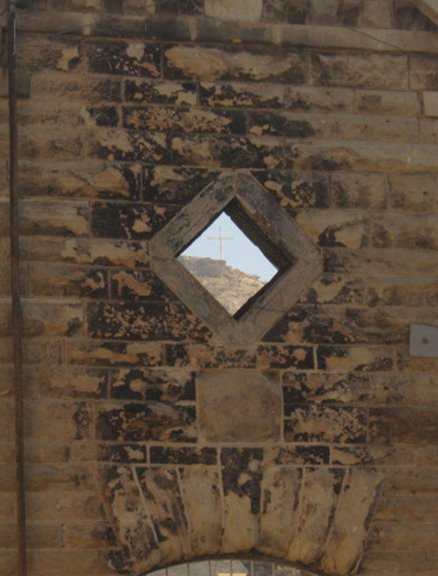 Prisoners view of the cross up on the hill that overlooks the Idaho Pen (courtesy of Caley Richards). Click on the pic to hear some oral history interviews from previous guards at the pen. (bad link).

Daily Log of Premiere Week (no longer active link. I have to get it setup elsewhere).
Posted by John T. Richards at 8:48 PM No comments:

Click on the heading below and read the article by James Carafano. He uses the Steunenberg assassination for comparative purposes. Following that article are my comments that may or may not get posted on the Washington Examiner site. As of this posting, they have not.

Comments by John T. Richards
Considerable documentation exists regarding the trial of “Big Bill” Haywood for conspiracy in the murder of former Governor Steunenberg of Idaho. Most recently, the assassination and trial were documented in a public television program titled, Assassination: Idaho Trial of the Century. You can read about it at: http://idahoptv.org/productions/specials/trial/

As Mr. Carafano mentions, Big Trouble by J. Anthony Lukas “chronicles this crime.” However, Lukas, sometimes to the point of criticism of his minute detail, goes far beyond just a single crime as he documents the struggle between labor and capital during the 20th century industrial revolution and the mining exploration in the West. This struggle was a pivotal time in our nation’s history that would greatly influence the course of labor relations in the century ahead.

Regardless of one’s view of Bill Haywood, or where you fall in terms of labor and capital, to call the assassination of Steunenberg as a “one-off” demonstrates the shallow nature of Mr. Carafano’s knowledge of these events. We know that Steunenberg’s assassin killed some seventeen or more men during a western reign of terror that included a number of accomplices. Hardly a "one-off." I doubt Mr. Carafano read anything more of Big Trouble except reviews, cliff notes or perhaps listened to the very abridged recorded version. He certainly has missed grasping even a basic understanding of this epic discussion about 20th century America.

Big Trouble, though imperfect, is a detailed and exquisite exploration of the industrial revolution, the rise of labor and capital and the inevitable struggles (violent and non-violent). To categorize “Big Bill” as not being part of a broader social movement, comes, I am sure, as a surprise to both Haywood’s supporters and detractors. To summarily excuse a period of great social upheaval as amounting to “not much” is a rather surprising and uneducated view for a person of Mr. Carafano’s stature.

Are there "lone wolfs" out there? Certainly, and I concur that it is the terrorist networks that require our utmost vigilance and attention. However, a lone wolf, in these days of WMD, can cause great destruction and death and also requires our vigilance. Words do matter, and throughout history we have an uncountable number of individuals and groups that have been inflamed to sometimes unspeakable actions by the mere words of others.

The implications of those early 20th century events continue to influence us today. The struggle between labor and capital, as so intricately dissected by Lukas, and using the assassination of former Governor Steunenberg as the anchoring event in the story, cannot be thrown into the category of a “one-off.” The historical importance, and the human suffering and sacrifices on all sides, remains too important to be rendered such a dismissive attitude.

I will not belabor the historical content of Big Trouble. I do suggest that Mr. Carafano or those with historical interests, or that plan to use past history as a basis for argument, take the time to obtain at least a cursory understanding and appreciation of the topics under discussion. Read Big Trouble and/or the many other accounts of that period in history. In doing so, you will find many lessons that continue to be applicable today.

For more information and links to these resources, go to my blog at: http://steunenberg.blogspot.com/

"Barn Where Assassin Was Concealed"

I don't recall seeing a picture before of this "barn where assassin was concealed." I assume it was on the Steunenberg property, being "some 300 feet distant," but could be wrong in that regard. And whose house is that in the background? Is it a still existing neighborhood home? If any one can shed some light on this photo 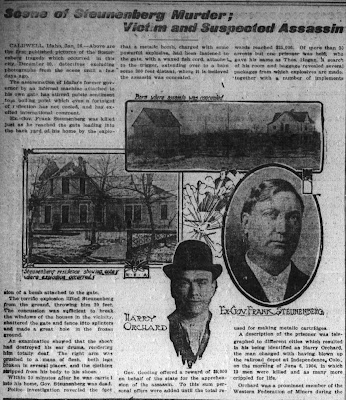 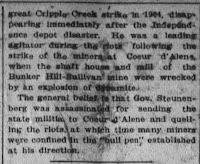 Posted by John T. Richards at 8:58 PM No comments:

Frank Crookham's birthday at the home of Bill and Berit in Caldwell, Idaho. How young is Frank?....100! A fine looking bunch of kinfolk with the guest of honor sitting front and center with the cane.

I sure enjoyed having Frank along to add his knowledge and reminiscing about the area when Cousin Bill took me on the Caldwell tour in recent years.

Posted by John T. Richards at 3:30 PM No comments:

When Everyone Had A Hankie...including Governor Steunenberg 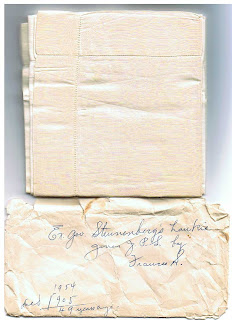